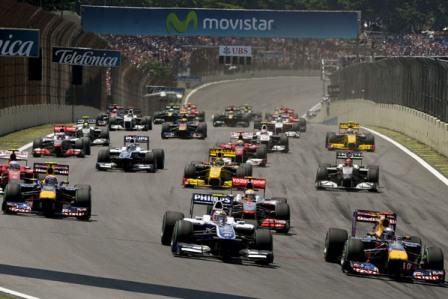 The Brazilian Grand Prix takes place at the Interlagos Circuit in Sao Paulo on 12 November 2017, with practice and qualifying on 10 and 11 November. Formula 1 fans hoping to see the climax of the 2017 season and possibly Brazil's most glamorous sporting event must plan to stay for the long weekend. Hotel packages in the city run usually for 3 nights from Thursday to Sunday. The Brazilian Grand Prix has now been moved to the penultimate race of the season in the hope of the championship remaining in the balance for one of the biggest races of the calendar, after recent years have had most issues decided before the final race.

Packages for the event include entrance for all three days, plus transfers between the hotel areas in the city centre and the circuit past the south-eastern suburbs of Sao Paulo.

Your trip to Sao Paulo for the Formula 1 Brazilian Grand Prix can also be combined with any other of our destinations in Brazil. Rio de Janeiro is the obvious choice just an hour's flight away, with the scenic Costa Verde within a few hours' drive, Iguazu Falls and Buenos Aires and the beaches of Buzios also within easy reach. Sao Paulo is the major hub for flights in Brazil, so connections can also be made to the Amazon, Pantanal or Salvador and Bahia if you really want to make the most of your time in Brazil.

Friday 7 November 2014. On arrival in Sao Paulo, the largest city in South America with a population approaching 20 million people, you will be met at the airport for transfer to your hotel in the city. Spectators can attend the free practice sessions during Friday at the Interlagos Circuit around 40km away from the centre of Sao Paulo. With a capacity of 80,000 people, and a chequered history including Fittipaldi, Piquet, Massa and the incomparable Senna, traffic will be very busy all weekend. With the Formula 1 Brazilian Grand Prix being one of the most glamorous sporting weekends in Brazil, you can be sure that Sao Paulo will be buzzing.
Day 2
Qualifying Sessions at Interlagos

Saturday 8 November 2014. In the morning you can enjoy breakfast before catching the free transport down to the Autodromo Interlagos. Once inside the circuit compound you can find your way to the grandstands and settle down for petrol-head heaven. There is a free practice session between 11am and Midday before a break for lunch and the serious business of the Brazilian Grand Prix begins. The Qualifying Session runs for an hour from 2pm on the 4.3km long circuit. There are many options for tickets in the Grandstands and also in the VIP and Paddock sections. After qualifying finishes, you catch the transport to the city with the evening free.
Day 3
The 2013 Brazilian Grand Prix

Sunday 9 November 2014. You should leave early for the Interlagos Circuit today as traffic approaching the compound will be very heavy. Gates open at 7am on all three days, while the build-up begins at 12.30pm, when the Drivers Parade introduces the finest of Formula 1 to the 50,000 crowd. At 1.30pm, the Starting Grid begins to fill. At 2.00pm, the green light goes on the first of 71 laps of the Sao Paulo Grand Prix. The chequered flag should be waved just before 4pm, with the champagne and podium presentations taking place almost immediately afterwards. Your journey back to the hotel could be a long one.
Day 4
The Chequered Flag

Monday 10 November 2014. Depending on the time of your international flight home, you should have the balance of the day free before you transfer to the airport. Your Brazilian Grand Prix Tour of Sao Paulo can also be combined with other destinations in Brazil such as Rio de Janeiro and Iguazu Falls. Flights away on the Sunday night are also possible although with such heavy traffic in the city, we prefer not to recommend this idea with the risk of missing them.