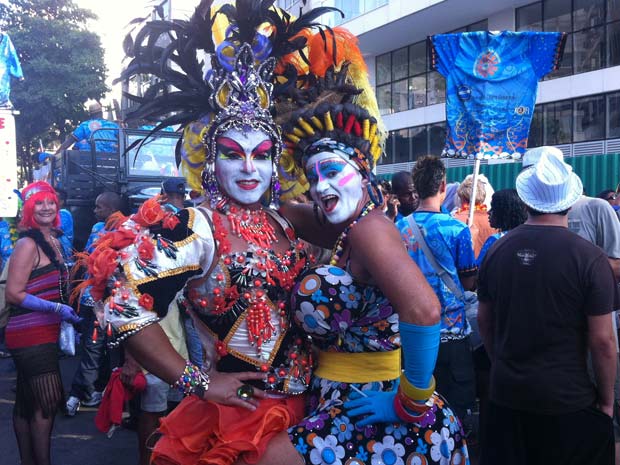 Carnival in Rio de Janeiro is the very best time to visit the world's most exotic city, and for the LGBT community, then this is perhaps even more so! From samba in the streets during the day to the riot of dancers, drums and carnival floats of the most extravagant designs in the Sambodrome at night, you will experience the city at its exhuberant best. Daytime visits to Christ the Redeemer and Sugar Loaf Mountain give you yet another perspective of Rio. As well as watching the Samba Carnival Parade, you can also participate in it! You receive your own colourful costume from one of the samba schools, and join their party as you parade the 700m along the Sambadrome in front of 80,000 spectators. This is generally best done on a separate night to watching the parade, as the organisation required to participate in costume means missing most of the parade night. Sunday night participating in costume and then Monday night watching the whole parade is what we recommend.

Hotels in Rio de Janeiro for Carnival Weekend require a minimum of 4 nights, with most at 5 nights to cover the long weekend of Friday to Wednesday. Dates for the public holiday of Carnaval Weekend in Brazil differ every year. For 2020 the weekend begins on Friday 21 February and finishes on Wednesday 26 February.

As well as the official Carnival Parade, there are hundreds of Street Carnival block parties ('blocos') happening all across the city during the weekend, some with official routes and plenty of craziness, others unofficial, random and who-knows-where-they-will-end-up ridiculousness (one finishing at the airport terminal being an example of the madness). We include a schedule for the weekend's blocos (although some have been known to run a little late!) that you may wish to attend close to the beaches, in the city centre, and up in Santa Teresa, with special mention to those that are popular with LGBT visitors. We include a list of recommendations to help you plan ahead, and that way you can decide how to make the very best of your Carnival Weekend, and enjoy it all safely.

Much of the action begins during the day on Posto 9, the world-famous gay section of Ipanema Beach. Friendly crowds spend the hot summer days there and the sultry evenings at (or at least 'outside'!) To Nem Ai, the bar on Farme do Amoedo that acts as the centre of the Rio Rainbow Carnival weekend for many people. The street may well be the busiest in the city, filling with people afternoon, evening and through the night! There are also nightclubs throughout the city if you need to escape the mayhem of Farme for somewhere slightly less crazy (ok, slightly less hectic, but no less crazy!) such as The Week.

The final part of the Rio Rainbow Carnival Weekend is the Gay Masked Ball. This is one of the most famous (or perhaps 'notorious'!) parties in the LGBT world, and everyone should tick it off at least once in their lifetime! The pink carpet parade takes place on the Tuesday night (usually at the Scala Theatre), going through until dawn and beyond as you would expect. We can arrange tickets and transport for this and for all your other requirements in Rio.

Whether you watch or participate in the Carnival Parade, attend as many blocos as you can, mask up and head to a ball, or just put your best fancy dress outfit on and walk the streets of Rio day and night, you can be sure to have a stupid amount of fun in Rio at carnival time, along with thousands of others.

This Rio Rainbow Carnaval Tour can be combined with any of our other destinations in Brazil, either before or after Carnival Weekend. Particular recommendations include a couple of days visiting one of the Natural Wonders of the World at Iguazu Falls, or spending some time on the beaches close to Rio de Janeiro such as Buzios, Paraty and Ilha Grande. Please bear in mind that the period immediately before and after Carnaval Weekend in Brazil is very busy. All flights and hotels will be reserved a long time in advance, so it is best to book as early as possible! Also, any coastal road journeys between Rio de Janeiro and the beaches will take a lot longer than usual, with heavy traffic as everyone heads away for the busiest holiday weekend of the year in Brazil.

Best Time to Visit: Rio Carnival Celebrations can be enjoyed all through that weekend, which falls before Lent (and Pancake Tuesday!), usually in February or early March then. The two weekends before Carnival can also see Rio at its exuberant best with the Street Carnival weekends, while the Champions Parade takes place the weekend following Carnival. These options can be cheaper than the main weekend, although the main weekend is by far the best for a true Rio Rainbow Carnival!

Friday 21 February 2020. Your Rio Rainbow Carnival Tour begins as our guide meets you at the airport and describes the Marvellous City to you during the journey to your hotel. A spectacular introduction to Rio comes from the cable car ride to the top of Sugar Loaf Mountain, guarding the entrance to Guanabara Bay, with views over the city and its mountains and beaches. You can then enjoy the afternoon, perhaps with a first look at the renowned Posto 9 on Ipanema Beach, the section most frequented by the LGBT crowd. The whole weekend will be as busy as it will be friendly, the same as with Farme do Amoedo, perhaps the busiest street in Rio during Carnival!

Saturday 22 February 2020. Carnival Saturday in Rio de Janeiro. With a lot to squeeze in over the weekend, Saturday morning might be the best time to visit the statue of Christ the Redeemer for more marvellous city views! Afternoon can be free for the beach, before the Ipanema streets are taken over by Banda de Ipanema! One of the traditional and most famous block parties (blocos), the true Rio Rainbow Carnival celebrations begin with the colourful parade along the beach and around to the square, replete with the best drag queens in Rio (and that really is saying something!) in the most fabulous and creative outfits! Saturday evening can continue into the morning at clubs such as The Week.

Sunday 23 February 2020. Sunday is free to relax around the beaches, enjoy the music and capoeira displays. In the evening, you transfer to the Sambodromo where the world's largest parade takes place. From 9pm through until dawn on both Sunday & Monday night, 6 of Rio's 12 main samba schools compete with spectacular floats of costumed dancers and drums batteries. The parade is a riot of colours & costumes, feathers & flesh as each school has 80mins to impress judges with their hand-built, hand-powered floats. You can either watch from the stands and private boxes, or you can participate with your very own costume as you make your way down the Sambodromo parade ground!

Monday 24 February 2020. With the Carnival Parade lasting until dawn an easy Monday is recommended! Fresh fruit juices from the colourful bars on every Rio corner help to replenish vitamins. The samba beats return to the streets in the afternoon and may begin to move your feet once more. Festivities continue in clubs and masked balls across the city, not just in the Sambodromo. The magic of Carnival in Rio de Janeiro is that you can feel part of the spectacle in any part of the city. The atmosphere is as lively and colourful as the costumes, and dressing up is all part of the fun. Weird and wonderful sights are guaranteed on the streets of Rio during Carnival!

Tuesday 25 February 2020. After a free day, evening can be spent at the famous Gay Masked Ball, which takes place at the Scala Theatre in the city centre. The costumes date back to when Rio Carnaval was more of an exclusive affair, and based around the masked balls of Venice, with waltz as the main music. Samba Beats took over Rio in the early part of the 20thC and now dominate the whole Carnaval scene, but the masks and their parties are still going strong, with the Gay Ball being perhaps the wildest of them all! Dressing up in colourful costumes is essential, although your outfit is unlikely to be the most outrageous to walk the pink carpet. An alternative is the riotous Banda das Quengas bloco in Lapa.

Wednesday 26 February 2020. Your Rio Rainbow Carnival Tour is over! Your transfer to the airport will be arranged to get you there in time for your flight away. If you have more time to spend in Rio than the Carnival Weekend, then you could consider some time to relax after the hectic weekend. The beaches of Buzios or Ilha Grande are good options to unwind close by. Iguazu Falls is another obvious extension, with a couple of nights there before or after to tick off one of the natural wonders of the world. However you prefer to organise your time in Brazil, then we can help with all the details, and make sure that your Rio Rainbow Carnival is as memorable as it is fun...