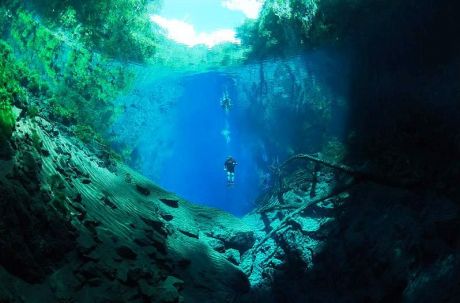 This snorkel and scuba special tour takes you to Bonito, deep in the mid-west of Brazil. This ecotourism paradise has the best of both worlds, with world-class snorkelling, unique scuba diving opportunities, and wildlife galore to be encountered, both in the aquatic life of the crystal clear rivers and cave lakes, and the wildlife of the surrounding riverbanks, wetlands and forests. The list of creatures observed in the Bonito area and the Serra da Bodoquena National Park is phenomenal, and many of them can be encountered during your journeys around the area as well as during activities. Some of the clearest rivers on earth give wonderful opportunities to snorkel amongst huge shoals of large fish such as pacu, piraputanga and the shining golden dourado. Mammals, reptiles and birds can also be visible in and around the rivers, with caiman, giant river otter and even a huge anaconda tranquilly sharing the waters with snorkellers while feeding on the abundant fish. Toucans, parrots and kingfisher add colour to the surrounding rainforest as they cross the rivers, while troops of monkey can be regularly spotted as they drop pieces of fruit from the trees for waiting fish.

While snorkelling the rivers of Bonito it is just as rewarding to check for terrestrial life as aquatic, with giant and collared anteaters, tapir and even a jaguar all observed drinking from the river, bathing in the waters or relaxing on the muddy banks.

This tour also has two special scuba experiences, with the Lagoa Misteriosa (Mysterious Lake) having unchartered dark depths as the bottomless lake continues to descend into the earth. The Anhumas Abyss rounds off your tour with the most adventurous activity of all. A 72m rapel down from a small hole in the forest floor and into a huge cavern is followed by a snorkel or scuba dive in the cave lake of stunning visibility amongst underwater cones formed from the deposits left to sink to the bottom of the lake as rainwater passed through the rocks in the roof. This fabulous adventure has to end with the rope climb back out of Anhumas, rounding off a unique Brazil Snorkel and Scuba Adventure in Bonito.

On arrival at the airport in Campo Grande, you will be picked up for the 3hr road journey to Bonito. The town itself remains a quiet place in the interior of Brazil, but the surrounding Serra da Bodoquena National Park holds many ecotourism attractions in its rivers, waterfalls and caves. You may be able to visit the ones closer to town, depending on the time of your arrival. The area has a limestone substrate and all water sources have their impurities calcified, which then drop to the riverbeds, leaving the beautiful water of Bonito crystal clear and perfect for snorkelling with some of the finest visibility on the planet.
Day 2
The Natural Aquarium of Bonito

A morning floating in the crystal clear rivers of Bonito takes you to the Natural Aquarium, perhaps the most charming part of Bonito\'s many fine snorkelling spots. The shallow bay holds its waters still, and the morning sun shining off them is a spectacular sight under water - the marine and plant-life become basked in a beautiful blue and yellow light and everything below the surface seems to be alive with colour. This is a special sight. After lunch, at the Mimosa Estancia you can enjoy a hike along the waterfalls trail there, with swimming spots in the natural pools. There is also a platform if you want to enjoy jumping into them from high above.
Day 3
Mysterious Lakes & Silver Rivers

Another day snorkelling in the Rio da Prata, perhaps the most spectacular Bonito river, with over 2km of floating including gentle rapids to traverse both on foot and in the river. The Silver River aquatic life is even more abundant, with huge fish such as the pacu, piraputanga and the beautiful golden dourado. River otters and rays can also be spotted in the water, while caiman alligators, enormous boa constrictors and on very rare occasions even a jaguar can be spotted sunning themselves on the river banks. After you visit the Lago Misteriosa, to scuba dive in the dark depths of this mysteriously deep lake. The day finishes at the Macaw\'s Hole, with dozens of these beautiful birds coming home for the night.
Day 4
Anhumas Abyss Adventure

Bonito is famous for the clarity of its waters, and not just in its relaxing rivers. The most adventurous activity rounds off your time in the town, with the descent into the Anhumas Abyss. This huge cave has a tiny entrance in the forest, from where you descend 70m into the bottom of the cavern. From here you can scuba (qualified divers only) or snorkel in the cave lake. The water clarity can reach 40m, and the experience is more spectacular still when the midday rays of the sun shine briefly into the cave, illuminating the water. The lake is home to rare underwater calcified cones of up to 19m height. This unique Anhumas Adventure is completed with the pull back up to the surface.
Day 5
The Bonito Adventure is Over

Destination: Bonito to Campo Grande & Away

Your Bonito Snorkel & Scuba Adventure finishes with the journey by road back to Campo Grande. From the airport you can fly to Sao Paulo, Rio de Janeiro or Brasilia to connect with flights home. Bonito also lies close to the Bolivian border for those wishing to head into the Andes for more adventures in Salar de Uyuni or Cochabamba. This tour can also be combined with other destinations inside Brazil such as the Pantanal nearby, or Iguazu Falls. However you prefer to organise the next stage, you can be sure that this Bonito Snorkel and Scuba Adventure will be one of the most memorable trips of your time in Brazil or anywhere else.